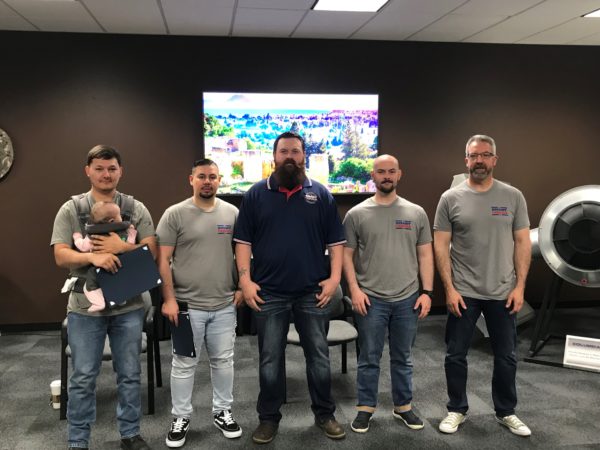 Upon completing a condensed training period designed to prepare them for a civilian career in sheet metal, four active-duty members of the United States military graduated from the SMART Heroes program’s Western Washington location Monday, June 6, at 2725 Williamson Place, in DuPont.

The program — created by the International Training Institute (ITI), the International Association of Sheet Metal, Air, Rail and Transportation (SMART) workers and the Sheet Metal and Air Conditioning Contractors’ National Association (SMACNA) — helps participants learn a new skill set, which can lead to a new civilian career once they’re discharged from the military.

The curriculum for the SMART Heroes program was created by the ITI, the education arm of the unionized air conditioning and welding industry. The ITI, together with SMART and SMACNA, created the program in collaboration with Sheet Metal Workers Local 66, SMACNA Western Washington, Western Washington Sheet Metal training center and Helmets to Hardhats.

The first SMART Heroes program was launched in August 2017 in Washington and was established to provide free sheet metal industry training to active-duty U.S. military men and women who plan to enter the civilian life within the year, thereby assisting in a successful transition into the civilian workforce. The second location in Colorado Springs began offering the same training in August 2019.